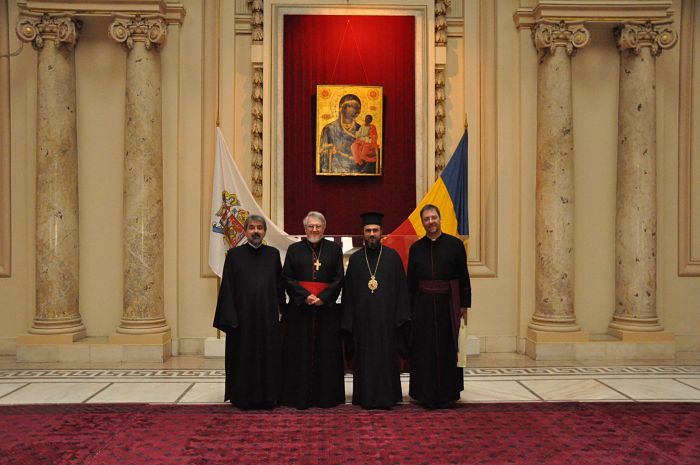 3rd BISHOP OF GIBRALTAR IN EUROPE

Over the coming days and weeks, many people will be heard to say that Bishop Geoffrey’s death marks the end of an era. Like Rowan Williams, he was consecrated after a sustained period in academia and with little or no parish experience. But let’s not forget David Jenkins, Michael Ramsey and John Habgood. They made a huge impact on the Church of England – and the society it serves. Geoffrey’s innate ability to relate to a wide range of people, and to engage naturally without condescension, undermines any clichés about academics and the ivory tower. Being with Geoffrey in a pub, or on a railway platform, was a constant delight. He would very quickly get talking to someone, and could talk about anything, from the Great Schism to the rising cost of child care.

I first met him at the funeral of a mutual friend, Donald Allchin, at St Mary Magdalene, Oxford. I left my post as archdeacon in the Church in Wales in 2011 to become Geoffrey’s Commissary and Chaplain. On moving to the Worth familias, I discovered a formidable intellect, a complete absence of political conniving for his own ends, a breath-taking humility, a gentle (but tenacious) confidence in what Anglican ministry should be, and an amazing capacity for friendship. Under his leadership, the Diocese in Europe grew. Despite the Diocese not having substantial financial resources, he was very proud of the fact that this growth was, more often than not, the outcome of simply having confidence in the evolving tradition. Reflection on the experience of the Church, worship that engaged with the reality of God, and a creative engagement with the social and cultural context was, for him, the way the Church could touch hearts and minds.

The fact that Geoffrey and I held differing theological convictions (over the ordination of women, for example) was never an issue. He attracted the confidence and trust of those who differed with him simply because he was a gracious, generous and hospitable person. He was trusted as a theologian, historian and ecumenical adventurer. He knew why people differed with him and he respected their stance. Having come from an ecumenism of Church and Chapel in North-West Wales, I was amazed by Geoffrey’s friendships with the Orthodox and Oriental churches, the Roman Catholic Church, the European Lutheran and Reformed churches. He could also feel at home at the ICS family Conference. The Oecumene suddenly became much more diverse – and challenging – than I had ever imagined.

Soon after I began working with him, Geoffrey pottered in to my office one morning, his face beaming with delight. ‘Bishop Johan Bonny [the newly appointed RC Bishop of Antwerp] has accepted my invitation to come for two days of conversation’ he announced with barely contained excitement. I soon learned that, despite his prolific output as a lecturer and author, ‘conversation’ was a crucial part of the way Geoffrey did his theology. He never allowed himself to be confined to his own ‘bubble’ where he was constantly surrounded by like-minded people, and where no-one could challenge him or enlarge his perspective.

One of the unchallenged assumptions is that parish experience is necessary for effective pastoral engagement and discernment. When Colin James, the Bishop of Winchester, offered Geoffrey the Suffragan See of Basingstoke in 1994, he told him ‘I must warn you, Geoffrey, becoming a bishop will expose you to the seedier side of the Church of England.’ Not only did Geoffrey’s long years as chaplain of an Oxford college prove that there was little he had not encountered before; he was able to bring a fresh pair of eyes and ears to the parochial sphere without being entrapped by its assumptions. This meant that he was a perceptive Father in God to his clergy. Astuteness and affection were two sides of the same coin. He had little patience with the growing management culture of the Church of England; but that did not make him a soft touch. His scholarly instincts meant that he never took anything at face value, nor did he act impulsively on hearsay. He gave time to people and situations, allowed them to be informed by his prayers, and would do everything he could to prevent a priest being diminished or isolated. During my time at Bishop’s Lodge, I cannot recall one intemperate, knee-jerk email from him. By contrast, there were torrents of beautifully composed and courteous letters, particularly where people were distressed or uncertain. A priest moving to a new post would always be assured that, on arrival, God would already be there to meet and greet.

‘Old men ought to be explorers’ insisted T.S. Eliot (East Coker) and Geoffrey’s love of discovering new places and faces meant that cultural curiosity was his stock-in-trade. Being Bishop in Europe was his dream job, and he made the most of the travel opportunities. Quite content with the economic constraints of Easyjet and Ryanair, he loved nothing more than spending time in his Diocese every weekend, invariably staying with the local chaplain, and making that all-important investment in relationships with his clergy. In the words of the ordinal, he knew his clergy and was known by them. Inevitably, this meant he was widely recognised far and wide. From the Pope downwards, whenever Geoffrey was in the room, people gravitated towards him. I have lost count of the number of times when, on a trip to somewhere in the Diocese, in a church or in an airport terminal, I would be introduced to an ambassador, a captain of industry or a senior military official, only to be told afterwards “one of my former students.” Such is the influence Geoffrey had on generations of gifted young people who have gone on to be leaders in their chosen career. Similarly, he has fostered countless vocations to the ordained ministry over the years. We can count several bishops among them. Geoffrey would always delight in continuing to be their teacher – especially at a meeting of the Liturgical Commission, the General Synod or the House of Bishops!

Geoffrey was comfortable in his own skin. He was as secure in himself as he was with God. This meant he was never threatened by the gifts and abilities of others, and he positively relished engaging with people whom, he sensed, were more experienced or better informed. I had barely been in post a day or two before I heard Geoffrey’s footsteps approaching my office. “Can you recommend anything on emotional intelligence?” he enquired. Despite his striking intellect, Geoffrey never hesitated to ask for advice, or to invite others to challenge his assumptions. There was no ideological fortresses: not only did he read widely; he was generous and hospitable in sharing his home with a wide range of people. Visits from people as diverse as composers, psychiatrists, or specialists in international relations were more opportunities for ‘conversation’ as Geoffrey would be delighted in learning something new, and having a new addition to what he used to call his ‘knapsack.’

At a time when we often appear to lack self-confidence in our Christian identity, how much do we need to draw deeply from the well of scripture, tradition and reason which daily refreshed and energised Geoffrey. His vision of the Church was gloriously wide and diverse. His perspective as a historian meant that he knew the peaks and troughs of the Church’s struggles and achievements down the ages better than most of us; and this enabled him to put the contemporary challenges of mission and growth into a much broader frame of reference. From Gregory Nazianzus to Newman, Geoffrey was excited by a vision of God the Holy Trinity, where a deep fascination for the mystery of the triune character of God fed his delight in the rich diversity of human experience. This is the vision that surrounded Geoffrey’s praying and worshipping, his scholarly engagement, and his pastoral encounters. How fitting that he should leave this world, and cross the threshold of death, on the feast of the Holy Trinity. May he enjoy for ever the ‘vision glorious’ that inspired his life and ministry – and the company of innumerable people to whom he ministered.