On Sunday 15th October, I licensed Joan Mason as a Reader in the Poitou-Charentes Chaplaincy, which covers a large area north of the Gironde estuary, including the cities of Angoulême and Poitiers. Joan has recently come to live here from Coventry Diocese where she was also a Reader. The Gospel (Matthew 22. 1-14) provided an opportunity to focus on the Church’s central act of worship.

Here in France, food is a central feature of life. It is endlessly talked about. It is endlessly enjoyed in social gatherings. It can be the focus of intense debate. And, of course, this emphasis on food is matched by the etiquette that accompanies eating.

This emphasis on food, and the etiquette of eating, is also true of the Middle East, the cradle of Christianity. It was true at the time of Jesus; and it is true today. Consequently, the gospels are almost as full of meals as miracles. We shouldn’t be surprised by this. By the time the gospels came to be written, Christianity was a religious movement with a sacramental meal as its central act of worship. The accounts in the gospels, which depict Jesus being on the receiving end of the disapproval of the Scribes and Pharisees while at table, highlights the extent to which this meal was a significant place of teaching and encounter in the ministry of Jesus. ‘Look’ they said, ‘the Son of Man comes eating and drinking’. The gospel-writers seem to have drawn on the language and images of the Old Testament where the fulfilment of God’s promises would be a triumphant banquet where all the peoples of the earth would be gathered to the feast.

This language and these images are taken up by Matthew in the parable we’ve just heard in the Gospel reading. He is telling this story to help us understand something of the scale of the rejection that Jesus suffered – and the rejection that his followers could expect. The fulfilment of the promised kingdom of God had been depicted by the prophets as a feast. But Matthew wants to say that those who are at the top of the invitation list would refuse their invitation. Instead, the outsiders, those who were considered unacceptable under the Jewish law, would take their place.

The instruction to the servants to go out into the roads and invite the good and the bad to the feast, betrays a pressing issue for Matthew’s community at that time. Those who were not Jews, and those Jews who had put themselves outside the Law, either by their behaviour, or because of some sickness or disability, were being called into the kingdom of God in place of those who had rejected the invitation. This is a description of those people who, like Matthew, had once been faithful Jews, but had become followers of Jesus. They were the focus of hostility and rejection. It resonates with what we heard a couple of weeks ago, when Jesus proclaimed (again, at a meal) that the prostitutes and the tax collectors were being ushered into the kingdom ahead of the Scribes and Pharisees, the senior Jewish clergy. Now, the outsiders, and those not deemed good enough, would be the ones who would get to eat and drink at the feast of the kingdom. This is a familiar theme in Matthew’s Gospel. But there’s an unexpected twist – a twist of etiquette that any self-respecting French person might understand.

In the ancient near-East, custom demanded that, if you were invited to a wedding feast, you didn’t necessarily need a special costume; but your clothes did need to be freshly washed. To turn up to a wedding banquet in dirty clothes was insulting. It betrayed a lack of preparation. It suggested that your arrival was a grudging afterthought. Not surprisingly, the man without a wedding robe was bound by his hands and feet and unceremoniously thrown out of the party. It is a forceful reminder of the perils of coming to the feast without really wanting to be there. There are choices to be made and commitments to be made. This feast is serious business – and our life depends on it.

The Gospel calls us to imagine that we have been invited to the banquet of the kingdom. We must get ready, make proper preparation, and believe that our very life depends on it. We are given no hint as to whether the guest who was unceremoniously ejected, represented either Jew or Gentile. And, in one sense, it doesn’t really matter. Racial, cultural or religious identity alone is no guarantee of salvation. ‘Many will come from east and west and recline at table in the kingdom of heaven with Abraham, Isaac and Jacob, while the children of the kingdom will be turned out into the dark’ warns Jesus. Matthew was clear that the followers of Jesus will not necessarily prove to be more faithful than the Jews – and our terrible history of anti-Semitism bears witness to this.

Of course, the readiness is all. How we come to the feast is a sign of how we respond to God’s invitation. Why? Quite simply, because that is how God has always behaved towards us. God’s invitation isn’t based on racial criteria, on our social standing, or on some capricious assessment of how good or bad we are. He calls all the peoples of the earth to share his feast, and to live today as if God’s promised future were already here among us. God doesn’t regard any one of us as a grudging afterthought. He invites us to reach out and take hold of the new beginning he offers, where there are no rights or claims, no question of repayment, no wait-and-see. If this is how God behaves towards us, how much should we behave towards one other in a world of rising ethnic tensions, where terror and death seem to stalk us at every turn?

What we celebrate here, this morning, is the feast where death is transfigured into life, where hunger is satisfied, where social and cultural distinctions are meaningless. It is a generous and unconditional invitation to walk into the future unafraid. It is God’s sign to the world that, in every invitation to the feast, a new and transformed future becomes possible, right here in our very midst. 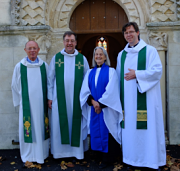 And that, finally, brings us to the happy task of authorising Joan to lead worship here in the Poitou-Charentes chaplaincy. All of us who have the awesome responsibility of leading the people of God in worship need to be reminded of the seriousness of our calling. Not only should we be well prepared for the feast; we need to enable those we lead to approach worship with a sense of mystery and wonder and, perhaps, a bit more silent attentiveness. We need to satisfy what the poet, Philip Larkin, called the ‘hunger to be more serious.’ This is how God breaks through the chatter and the ambivalence that can make our worship tired and uninspiring. Those who lead worship have a responsibility to show all of us how to come to the feast in the right frame of mind; to nourish us with the things on which our very life depends; and to send us out from here with a keen awareness of those who are longing to be here – those who need to hear God’s generous invitation through us. For, when we gather at this feast of the kingdom, we catch a glimpse of life as God intends it to be. 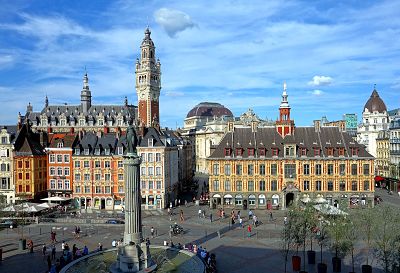 I wonder what the historians will be saying about this period of European history in future centuries? It’s a challenging time – […] 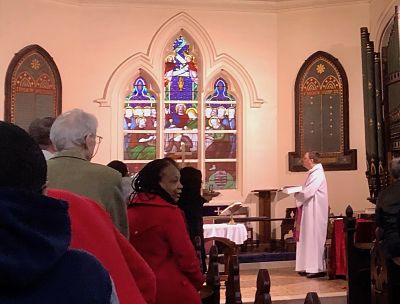