For links to information about Brexit from the French and UK governments and other sources, go to this page.

For information about the new PAYE system in France, go to this page.

Churches in France are in the news in The Connexion France 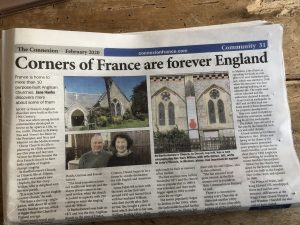 An Ecumenical service in Bordeaux

French television broadcast an ecumenical service from Bordeaux as part of the Week of Prayer for Christian Unity.

Ecumenical News from the South West

Congratulations to everyone who contributed to the donation to Sight Savers

A Communiqué from the Archdeacon and the Standing Committee

What has the committee been discussing?